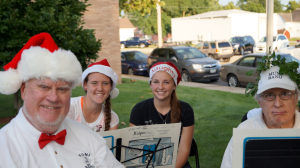 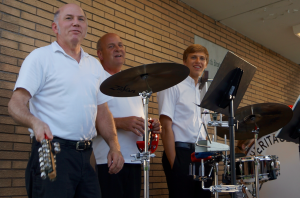 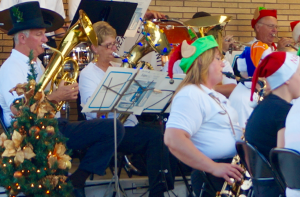 Our first featured member of the 2014 season is Darwin Rosenthal (or as we call him, Rosie). Rosie has been in the band for more almost 3/4 of a century. That’s almost half of the band’s entire 150 history. Please enjoy and this video and share it with your friends. 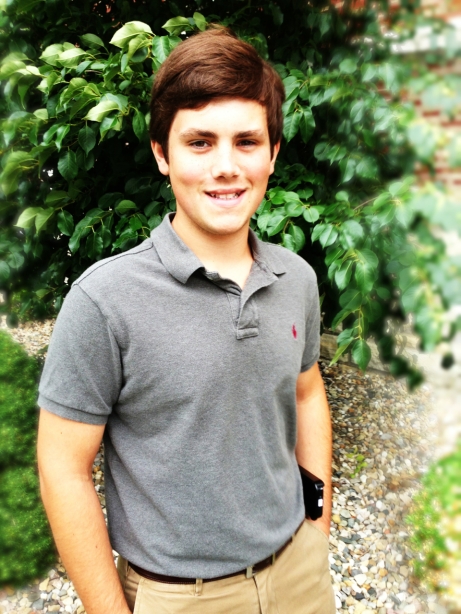 Blake Kolesa is a holder of one of our band’s Scholarship Honors Chairs and will receive a scholarship upon High School Graduation. He is growing as a serious musician and lends his good sense of humor to the trumpet section.

Can you tell us a little about yourself? Being only 16 years old, I have much less to tell than the featured band members before me. I have been playing the trumpet for six years and am playing my second season with the Heritage Community Band. I’ve played with several other groups including the Staunton High School Marching Band, the VFW Post 1241/American Legion 246 veteran’s honor guard, and the Zion Lutheran Church Instrumental Group. I have played, along with percussionist Jared Royer, the Star Spangled Banner to open school events. I am an Eagle Scout with Boy Scout Troop 34 and play both Golf and Scholastic Bowl for SHS.

How did you become a member of the band? Following the memorial day ceremony in front of Staunton City Hall in 2011, Boy Scout Troop 34 Scoutmaster David Cisler pointed out Todd Anderson to me. I approached Todd and, after helping him carry his chair to his car, received a rehearsal schedule from him. I was unable to play with the band in 2011 because of schedule interference and prior obligations. In 2012 I returned to play my first season with the band after the urging of then SHS Band Director Jennifer Koehne and am now playing in a Scholarship Honor Seat.

What is your favorite memory of the band?  Over the past two years, I have made many memories with the band, two of which have stuck with me. The first of these memories is memorial day 2013, my first memorial day performance with the band. This day was full of band camaraderie as we played concerts in Gillespie, Staunton, and Benld. The tunes were good, the crowds were great, and the band was in full swing. (The free food at the Staunton VFW didn’t hurt.) The second memory of the band that sticks with me was made on June 13th when we played the second of our four concert series in Mt. Olive with SIUE trumpet professor John Korak. After the concert, I spoke to Dr. Korak and scheduled a private trumpet lesson that provided much insight into improving myself as a trumpet player. I look forward to taking more lessons with Dr. Korak as well as making many more fond memories with the Heritage Community Band.

This time with our Featured Member, we’ll have a slightly different format. That’s because Louvine’s life history is closely intertwined with the band. As she demonstrates, she’s been attending band rehearsals of one sort another for the last 79 years!

I was born in 1929 as Louvine Gieseking. In 1934, I attended my first band rehearsal with Harvel Community Band. My parents played violin. I was only five and didn’t play but I loved the music. In 1941, the High School Band Director at Harvel was Joe Basso from Gillespie. He taught me trombone and trumpet.

In 1945, I joined AFM Local #88 and Mr. Basso invited me to the Gillespie Community Band Rehearsal. There I met my future first husband, Dick Sies. In 1946, I went to Millikin University and married that year. I played 5-piece dance band gigs on the weekends and did summer music with the Carlinville Band, at that time directed by Professor Reed. I also played in the Gillespie Band, directed by Mr. Phillipe, the Benld Band, directed by Mike Sciarra, and the Mt. Olive Band, directed by Jim Kenneth. I played for many Blackburn College musicals under fine directors.

In 1970, I joined the Staunton Band. The Director then was Mr. Howard Meyer. Eventually, he retired and was replaced by Mr. Ken Kay.

In 2006, I was invited to play with the Prairie Winds (Big Band) at Pana, IL. There I met my second husband, Darrell Crowe at rehearsal. In 2008, we got married and exchanged trumpet mouthpieces during the ceremony. Darrell also plays in the bands I’m in.

I’m so proud to have a daughter, three granddaughters, one great granddaughter and one great grandson who play. That’s four generations in the band! May all our bands continue to entertain people. All of the friendships made in all these years are priceless! —With Loving Memories, Louvine Sies

Featured Band Member of the Week–Sandy Riley (Scroll down to read more) Published May 15, 2013

Sandy always provides cheer for the band and keeps our announcer John Fassero (our previous featured player of the week) on his toes. She loves a musical challenge, too!

Can you tell us a little about yourself?  I moved from Ohio to IL in 1973 where I completed my BA in Education from SIUE in 1980. I began teaching Special Education classes in 1980 in East Alton and at the same time continued attending SIUE to receive my MA in Education in 1983. I worked in E. Alton for 28 years, retired in 2004, and then in 2005, I resumed a teaching career at Zion Lutheran School in Staunton, IL for five more years. I am now officially retired, but always busy. My daughter, Shane Foster, and her family lives in Staunton, so I am very engaged in all the sports and music activities of my three grandchildren. My son, Travis, lives in Missouri with his wife, Michelle and their son, Connor, so I try to visit them as much as I can. I am very involved in music programs in this area. I belong to the Carlinville Blackburn College Band which performs for about nine months of the year, as well as the Municipal Band which performs all summer. In addition, several of us play from time to time in a brass quartet at weddings, churches, and wherever we are asked to play.

How did you become a member of the band? I loved being in the band in high school and always dreamed about playing as an adult, but sometimes life just gets in the way-having babies, college, working, etc. In 1985 I saw an ad in the Edwardsville newspaper for a used baritone for $100.00. I drove to the owner’s house in the middle of a blizzard to buy this horn (it’s not as though there was a line of people waiting to buy it), but I had to have it right then. Shortly after that I moved to Godfrey, IL taking my treasured horn with me. Several months later an exterminator saw the horn case while spraying my basement and told me that Lewis and Clark Community College Band needed brass players, so my dream to play as an adult happily came true. But then I moved to Staunton, IL in Sept 2001 (again toting my treasured horn with me), unaware of any music group in this area. While attending the Memorial Day parade in 2002, I saw this very small group playing some marches, so I made a very BOLD decision to follow the one baritone player in the group to see what I might need to do to participate in this band. I literally stalked him all the way to the VFW hall, where I actually went in to find him with a group of men in a booth. I couldn’t believe I walked into this place by myself in search of information. That person, whom I later learned was John Fassero, my current baritone buddy, gave me all the instructions I needed to join, “Show up for rehearsal!”

What is your favorite memory of the band? I am still teased mercilessly about one of my early transgressions in the band. We switch practice sites throughout the summer according to the location of our concerts, and the place given for our next rehearsal was the Gillespie CC. Being new to this area I made the assumption that CC stood for Catholic Church, so I tried to find one in Gillespie, but that definitely was not the correct place. Then I thought perhaps a Country Club, but again, not there either. I drove all over Gillespie for an hour and a half and finally went home, wondering where in thunder my rehearsal was located. Turns out, it was the Civic Center! Who knew? I will say that I have loved every minute playing in this band.

Featured Band Member of the Week–John Fassero (Scroll down to read more) Published May 10, 2013

John Fassero has been our concert emcee for many years. Prior to each concert, he researches the music for the evening and makes every concert informative and fun. His calming baritone voice and cornball humor are enjoyed by audience and band alike. In an age of constant media saturation and noise pollution, John helps make concerts a great escape from the hot summer day.

Can you tell us a little about yourself? I live on a farm north of Mt. Clare. We used to farm row crops and raised 100 head of cattle. We sold the cattle and leased the farm when I went to the Navy (1968). We no longer farm. We had a small petroleum wholesale business that we sold in 1990 and I am very fortunate to now have a sales position with Aladdin Steel. I can make a reasonable living just 10 minutes from home.

How did you become a member of the band? I don’t remember the exact date, but I have been playing in the band for approximately 30 years. I played in elementary and high school and put the horn down after high school graduation. I went to St. Louis University (64-68) getting a degree in marketing. I then went to Naval Officers Candidate School in Newport, RI. I achieved a commission, went to legal school and gunnery school, joined my ship and went to Viet Nam. I made 3 trips to Vietnam and completed my active duty Christmas ’71. I came home and went to work, eventually marrying and raising 3 children. All during this time, I did not play in the band. 20 years after putting my horn down, my good friend, Dick Meno, encouraged me to pick up my horn again and start playing.

I eventually listened to him and have enjoyed every minute of my experience with the band since. I guess I started announcing around 20 years ago and I hope to bring a little information to our audience about the songs we play the people who compose them. In Mozart’s case, he’s decomposing—I do like to tell a bad joke or two.

What is your favorite memory of the band? My favorite memory of the band is everything. I know that is a coward’s way out, but truly, I enjoy all of it. I like the thought of preserving a bit of Americana. A band concert in the park on a summers eve is a very old tradition in America. A band concert in the park used to be greatly anticipated and very well attended. There are fewer bands today and even fewer people who truly understand what a rare asset a municipal band is and how we should all work to preserve a municipal band, not only for our own enjoyment, but also for future generations.

I am honored and privileged to be a small part of this band that has such a long, rich tradition. I intend to continue playing as long as I feel that I can make a positive contribution. When the day comes that I can no longer keep up, I hope that I have the dignity to know to step aside and let the younger generation go on. I also hope that I won’t have to worry about that eventuality for a long time.

Staunton, Benld and Gillespie. See homepage for times.May 22, 2021
Thanks for coming to hear us play!